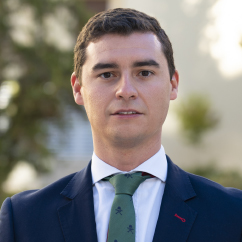 Eduardo Pedregosa is a senior associate at G-advisory and holds a degree in industrial engineering from Universidad Pontificia de Comillas. He began his career in the energy sector in 2013, as part of the solar thermal asset management team at Grupo Cobra, work that he continued after moving to Saeta Yield in 2015, giving him extensive knowledge of asset management and solar thermal technology. In 2017 he became part of the wind operations department, where he led the management of wind assets in southern Spain. Additionally, he has participated in processes for the financing of assets and for the acquisition of new assets.

Since joining G-advisory in 2018, he has gained experience in the energy area, providing technical and economic advice to investors and financial institutions in the framework of financing and asset sale and purchase transactions, mainly in the fields of solar photovoltaic, solar thermal, wind and biomass in Spain, as well as in other countries in Europe and Latin America.