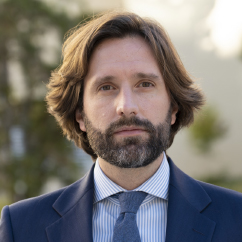 Juan Cruzate is a principal at G-advisory and holds a degree in industrial engineering from Universidad de Salamanca. He also holds a masters’ degree in corporate finance from Centro de Estudios Garrigues. He began his career in the energy area of G-advisory in 2008. Since then, he has provided technical and economic advice to financial institutions and investors on the financing and acquisition of energy assets involving a wide range of technologies, including wind, photovoltaic, CSP, mini-hydroelectric, cogeneration and combined cycle.

He has also worked on projects relating to the treatment of waste or the integrated water cycle. He also specializes in advising on economic matters, carrying out asset valuations and analyzing the viability of energy projects. He has participated in both national and international projects, principally in Latin America, as well as in Europe, Asia and Africa. Between 2016 and 2019 he was Country Manager of the G-advisory office in Santiago de Chile, which offers services to countries in the Southern Cone region.